Kiev asks for western presence in sea it shares with Russia, saying Putin is blocking ports.

The Ukrainian president, Petro Poroshenko, has called on Nato to deploy naval ships to the Sea of Azov to “provide security” amid a deepening crisis with Russia.

Nato foreign ministers are due to meet next Monday in Brussels and will assess their existing presence in the area, but it is unlikely they will send warships to the area.

The German chancellor, Angela Merkel, insisted there was no military solution, even after describing Moscow’s actions as unacceptable. She said she would be talking directly to the Russian president, Vladimir Putin, at the G20 summit in Argentina, which starts on Friday.

This week’s renewed crisis in Russian-European relations erupted after Moscow seized three Ukrainian naval ships and their crews on Sunday in waters off Russian-annexed Crimea.

The ships were trying to make their way through the Kerch strait to the Ukrainian port of Mariupol in the Sea of Azov. Ukraine said Russia used a tanker to block access to the Kerch strait, which under a treaty is shared territory. Russia said the vessels illegally entered its waters.

On Thursday Donald Trump abruptly cancelled his own planned G20 meeting with Putin, blaming Russia’s failure to return the seized ships and sailors.

The Crimean courts have put 24 Ukrainian sailors under two-month pre-trial detention. Some of the sailors have been flown to Moscow, two of their lawyers told AFP on Thursday.

Ukraine claimed Russia was escalating the crisis by imposing a de facto blockade on two Ukrainian ports on the Sea of Azov and barring ships from leaving and entering via the Russian-controlled Kerch strait.

Russia has blocked 35 merchant ships from leaving or entering the Sea of Azov, Ukraine asserted. The infrastructure ministry said on Thursday 18 ships were stuck in the Black Sea, waiting to pass through the Kerch strait into the Sea of Azov, and another 17 vessels were unable to sail out of the Ukrainian ports of Mariupol and Berdyansk. 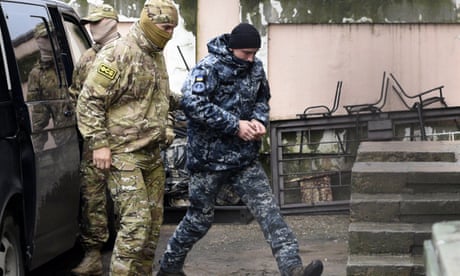 Kerch strait confrontation: what happened and why does it matter?

The Kremlin denied it was restricting shipping and said if there was any blockage it was because of bad weather.

In his most fiery rhetoric of the crisis, Poroshenko accused Putin of wanting to annex Ukraine, telling the German newspaper Bild on Thursday: “Don’t believe Putin’s lies. Putin wants the old Russian empire back. Crimea, Donbass, the whole country.” Likening Putin to a Russian tsar, he said: “He believes his empire cannot function without Ukraine – he sees us as his colony.”

He called on Germany to increase existing economic sanctions against Russia and again urged Berlin to rethink its plans to allow Russia to build a new gas pipeline, Nord Stream 2, which he said would leave the EU even more dependent on Russian energy and deprive Ukraine of badly needed income derived from its existing pipeline.

Speaking at a Ukrainian business forum in Berlin, she said: “We must do everything to help places like Mariupol …We can’t allow this city to just be cut off, thus indirectly isolating further parts of Ukraine.

“The Ukrainian side has asked us to act wisely … there is no military solution to these problems, we have to emphasise that.”

In a tweet sent en route to the G20 summit, Trump said: “Based on the fact that the ships and sailors have not been returned to Ukraine from Russia, I have decided it would be best for all parties concerned to cancel my previously scheduled meeting … I look forward to a meaningful Summit again as soon as this situation is resolved!” .

Russia claims the Ukrainian vessels ignored “the legitimate demands of the coastguard of the border service and the Black Sea fleet to immediately halt, and end performing dangerous manoeuvres”. It says a chase involving some gunfire ensued in order to stop the Ukrainian ships, which were detained in Russian territorial waters.

The Ukrainian authorities have introduced martial law in selected regions along the border with Russia as well as along the coast of the Black Sea and the Sea of Azov for 30 days. It includes an order that only Ukrainians can enter the country. Poroshenko also tweeted on Thursday that he would impose unspecified restrictions on Russian citizens in his country and spoke of banning some foreign currency and banking operations in Ukraine.

Putin and Poroshenko motives open to question in Kerch crisis

The Turkish president, Recep Tayyip Erdoğan, offered to play a mediator role between Ukraine and Russia alongside Merkel. He has held phone talks with leaders on both sides, and said he would continue discussing the issue with Putin and Trump at the G20 summit.

Kiev has called for Russian vessels to be banned from passing through the Bosphorus strait in Turkey as a reprisal for the Kerch strait standoff.

Merkel put the crisis in a wider context of Russian interference in eastern Europe, accusing Russia of creating instability not only in eastern Ukraine, but also in Georgia, Moldova, Azerbaijan and Armenia. “There is a belt of countries that cannot develop as they want. In the face of this, we cannot close our eyes as Germans.”