WASHINGTON — Former Vice President Joseph R. Biden Jr. is in the final stages of deciding whether to run for president and has told allies he is skeptical the other Democrats eyeing the White House can defeat President Trump, an assessment that foreshadows a clash between the veteran Washington insider and the more liberal and fresh-faced contenders for the party’s 2020 nomination.

Many Democratic voters, and nearly all major Democratic donors, are keenly interested in Mr. Biden’s plans because of their consuming focus on finding a candidate who can beat a president they believe represents a threat to American democracy. But there is also a rising demand in the party for a more progressive standard-bearer who reflects the increasingly diverse Democratic coalition.

Mr. Biden would instantly be the early front-runner if he ran, but he would have to bridge divides in a primary that would test whether Democrats are willing to embrace a moderate white man in his 70s if they view him as the best bet to oust Mr. Trump.

“He has the best chance of beating Trump, hands down,” said Senator Tom Carper of Delaware, Mr. Biden’s longtime friend and former colleague. “On a scale of one to 10, that’s probably about a 12 for us.”

Yet Mr. Biden’s skepticism about the field could alienate female and minority voters who are excited that several women and African-Americans are expected to run. Nominating a white man may also roil some Democrats who are already torn about whether a woman could win in 2020 after Hillary Clinton’s loss. And Mr. Biden’s preoccupation with winning back blue-collar Midwestern whites could place him at odds with Democrats who see greater potential for growth in the highly educated suburbs and across the booming Sun Belt and upper South.

More broadly, debate around Mr. Biden’s possible candidacy illustrates the dueling visions in the party and particularly the divisions between its pragmatic and liberal wing. Some Democrats are skeptical that a relatively moderate candidate like Mr. Biden, who has baggage like supporting the 1990s crime bill that is loathed on the left, would prevail in the primary with a message of unity and national healing rather than the fiery and uncompromising brand of populism that Democratic primary voters elevated in the midterm elections.

“In 2020, Biden-style centrism will become a toxic and losing brand of politics in Democratic primaries,” said Waleed Shahid, a left-wing activist.

The 76-year-old former vice president, who leads the field in initial national and Iowa polls, has not yet told his allies that he has decided to run. And they emphasize that Mr. Biden’s decision will not be final until he says it for himself, noting that family considerations are central. Mr. Biden sought the presidency twice before but he has also considered it at least as many times before bowing out.

But Mr. Biden has indicated that he is leaning toward running and will most likely make a decision within the next two weeks, according to Democrats within and beyond his inner circle who have spoken to him recently.

The former vice president told a senior Democratic official last week that he is both likely to run and that his aides have told him he must move quickly in this primary, according to two Democrats briefed on the conversation.

Mr. Biden is under significant pressure from his party’s major donors to make up his mind — no later than the end of January — or risk watching them migrate to other candidates. Mr. Biden and his advisers are highly sensitive to the criticism that in 2015, he dragged out his decision before ultimately opting out of the Democratic primary, exasperating his supporters and undermining the Democratic front-runner, Mrs. Clinton, in the process. 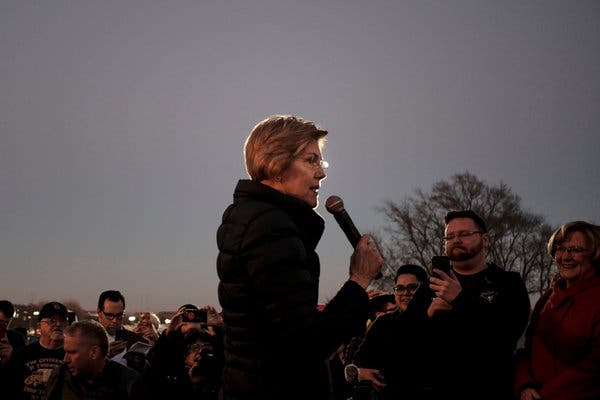 He spent some of his Christmas vacation in the Virgin Islands calling and texting his would-be supporters and is using this week to hold private meetings in Washington with Democratic officials.

In one of his calls over the holidays, Mr. Biden repeated a variation of a line he has used publicly: “If you can persuade me there is somebody better who can win, I’m happy not to do it,” he said, according to the Democrat he spoke to, who shared the conversation on condition of anonymity to discuss a private talk.

But then Mr. Biden said something he has not stated so bluntly in public: “But I don’t see the candidate who can clearly do what has to be done to win.”

In another possible sign that he is preparing to ramp up, an emissary from Mr. Biden recently reached out to James Smith, the Democratic Party nominee for governor in South Carolina last year, about scheduling a call with the former vice president. Mr. Smith, a state legislator and friend of Mr. Biden, said the former vice president could count on an enthusiastic reception in South Carolina if he were to run.

“In the circles that I move, I think there’s almost unanimity of support for him,” Mr. Smith said.

But Mr. Smith acknowledged that in Mr. Biden’s absence, others were making moves in South Carolina. Mr. Smith said that after his defeat in November, he had heard from several contenders, including Senators Cory Booker of New Jersey, Kamala Harris of California and Elizabeth Warren of Massachusetts — none of whom, he said, could count on scooping up Mr. Biden’s network.

The entry of Mr. Biden would immediately upend the still-nascent primary: Ms. Warren joined the race last week and three dozen other Democrats are considering it. Mr. Biden could crowd out other establishment-aligned contenders like former Mayor Mitch Landrieu of New Orleans and former Gov. Terry McAuliffe of Virginia, given that Mr. Biden’s donor base and supporters may overlap with some of their own. And Mr. Biden’s allies are themselves mindful of another Democrat whose blue-collar credentials could pose a challenge to their own coalition: Senator Sherrod Brown of Ohio.

Most of all, a Biden candidacy would also frame the primary around the question of whether Democrats prefer a familiar face and steady continuum of former President Barack Obama’s center-left politics, or a generational change and turn to a more liberal, confrontational approach to Mr. Trump and the right.

Mr. Biden’s supporters argue that Mr. Trump’s incendiary conduct and norm-breaking presidency have so imperiled the country that only somebody with the stature and experience of a two-term vice president can bring back stability. And, they contend, Mr. Trump has diminished the importance of ideological differences within the Democratic Party.

“Variations in policy positions don’t really matter because, to paraphrase the president, we are in a national emergency — but the national emergency is him,” said Lou Frillman, who was a major fund-raising bundler for Mr. Obama’s campaigns and is close to Mr. Biden. “The vice president has all the qualities necessary to win, and I think he has all the qualities the country is going to so desperately need to bring us back from the edge.”

Most of all, Mr. Biden’s allies contend, he would be the Democrat most likely to reclaim the battleground state voters who abandoned the party in 2016.

“If you look at Wisconsin, Michigan and Pennsylvania, the labor folks who voted for Trump, they love him,” former Gov. Jack Markell of Delaware said of Mr. Biden. “He has a connection with these people.”

Mr. Biden’s enthusiasts are also quick to note that he is not just popular with white working-class voters, but is also well-liked among African-Americans and millennials. 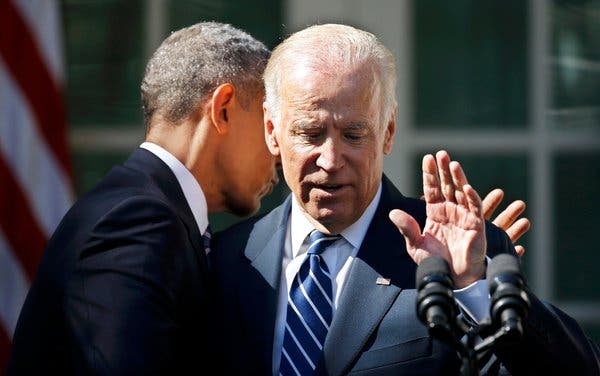 Mr. Biden has led in national and early-state polling, drawing about a third of the vote, enough to make him a solid but not overwhelming front-runner at a moment when such surveys are heavily dependent on name identification. He is viewed favorably by the vast majority of Democrats, but some surveys indicate Democrats want fresh faces and new leadership.

Mr. Biden would portray himself as a progressive, embracing priorities like free public college tuition and expanding health care, advisers say. But he would also make the case that his 36 years in the Senate and eight years as vice president make him the best qualified to repair the damage they believe Mr. Trump has done at home and abroad.

“This is a guy who actually gets along with Mitch McConnell and a number of other Republicans,” said Mr. Carper, invoking the Senate majority leader with whom Mr. Biden worked closely to negotiate a handful of agreements in the Obama years.

Yet the preferences of the party’s donor class and an ability to work in a bipartisan fashion are hardly alluring to the party’s increasingly liberal grass-roots activists and voters. And the candidacy of a Washington Democrat who fondly recalls his relationships with conservatives, and even used his speech bowing out of the 2016 race to make the case that Republicans are the opposition but not the enemy, may be ill-suited for the Trump era.

“We are at a time when we have a combative racist and often unhinged person in the White House, and that’s not going to be answered with somebody who says: Let’s come together and let’s heal and let’s all be gentle souls,” said Representative Pramila Jayapal of Washington, who supported Senator Bernie Sanders for president in 2016.

Part of Mr. Biden’s challenge would be what he represents as a septuagenarian who came of age in a consensus-oriented Senate dominated by white men, some of them segregationists, a political milieu as distant to millennial Democrats as the Civil War.

Should he run, Mr. Biden would quite likely face multiple major black candidates and no fewer than three prominent women. After the Democratic base elevated diversity to a first priority in the midterm elections, Mr. Biden would have little to offer voters determined to change the face of the presidency.

He would be counting, instead, on Democrats embracing a candidate from an ideologically and culturally traditional caste as an expedient for defeating Mr. Trump.

Perhaps just as daunting, Mr. Biden would have to answer for a political record stretching back nearly half a century. He has never faced the level of criticism from his fellow Democrats that he would earn as a leading candidate for president.

Mr. Biden has steadfastly supported important liberal priorities over the years, including gun control and labor rights, but he was also a loyal ally of the credit card industry as a senator from Delaware and backed a crime bill in the 1990s that is now seen by liberals as having forged a generation of mass incarceration.

In 1991, as chairman of the Senate Judiciary Committee, Mr. Biden presided over the confirmation hearings of Justice Clarence Thomas, including the interrogation of Anita Hill by a panel of all-white and all-male senators. And in 2002, he voted to authorize the invasion of Iraq.

But he has said before that he is not alarmed about the indignity of ending his storied career by losing a primary.

Invoking the 2015 death of his eldest son, Beau, Mr. Biden wrote in his book “Promise Me, Dad” that he understood “the difference between an electoral loss and real loss.”