Australian police are investigating suspicious packages found at foreign consulates and embassies in Melbourne and Canberra.

Melbourne’s Metropolitan Fire Brigade said it had been called to «a number of incidents» across the city.

Consulates of the UK, Switzerland, the US and Pakistan are among those evacuated there.

Some of the packages were reported to contain what appeared to be concrete, and were labelled asbestos.

There were no reports of harm to any staff.

«The packages are being examined by attending emergency services. The circumstances are being investigated,» the Australian Federal Police said.

State police in Melbourne said the incidents there were believed to be «targeted and not impacting the general community». 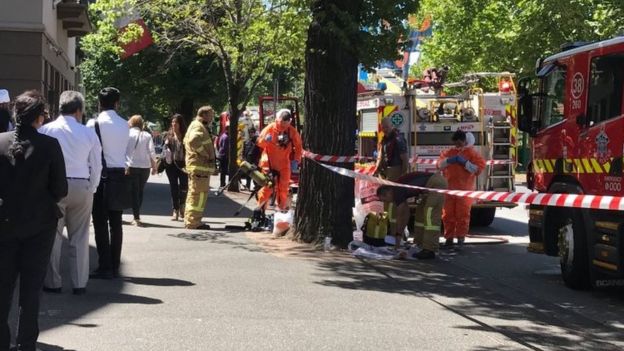 Emergency workers had been seen at consulates belonging to the US, India, Pakistan, Greece, South Korea, New Zealand, Italy, Spain, Switzerland and France according to Australian broadcaster ABC News.

They also attended an incident at a building housing the Consulate General of Turkey, ABC said.

Some emergency workers were seen carrying large bags with the words Danger Asbestos written on them, Australian media report.

A British High Commission official said its consulate general in Melbourne had also been targeted but «all our staff are safe and accounted for».

«We are liaising closely with the [federal police] and the local authorities,» the official added.

The US consulate in Melbourne had notified authorities about a suspicious package, a spokesman told Reuters.

«We immediately put the envelope in another bag and rang the emergency service and they came and took it away,» he told the BBC.

«We do know now that the item was not likely a bio-hazard.»

On Monday, suspicious parcels containing a white substance were sent to Argentina’s consulate in Sydney. They were later found to be non-toxic.