Venezuela has rejected an ultimatum from the UK and other European countries to call fresh elections within eight days.

«Nobody is going to give us deadlines or tell us if there are elections or not,» Mr Arreaza told a special session of the United Nations Security Council.

Earlier, Britain, France, Germany and Spain told Mr Maduro that he had eight days to organise fair elections or they would recognise opposition leader Juan Guaido, 35, as interim president. 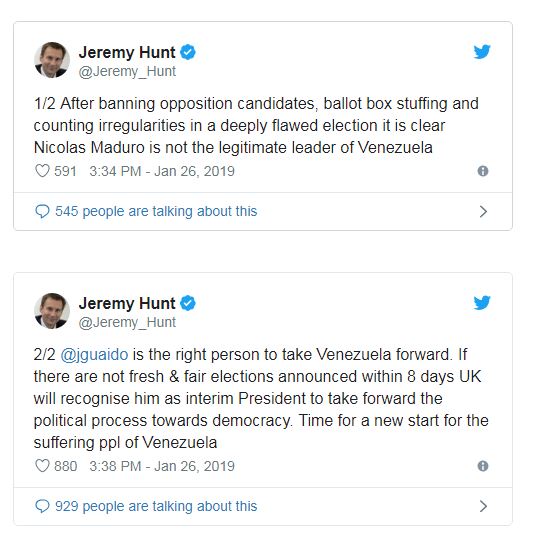 Foreign Secretary Jeremy Hunt tweeted: «After banning opposition candidates, ballot box stuffing and counting irregularities in a deeply flawed election it is clear Nicolas Maduro is not the legitimate leader of Venezuela.

«@jguaido is the right person to take Venezuela forward. If there are not fresh & fair elections announced within 8 days UK will recognise him as interim president to take forward the political process towards democracy.»

A spokeswoman for German Chancellor Angela Merkel tweeted that «the people of Venezuela must be able to freely and securely decide about its future».

America’s top diplomat, secretary of state Mike Pompeo, said it was time for countries to «pick a side» after Washington recognised Mr Guaido as the South American nation’s head of state.

«Now it is time for every other nation to pick a side… Either you stand with the forces of freedom, or you’re in league with Maduro and his mayhem,» Mr Pompeo told the UN Security Council.

Mr Maduro, 56, whose time in office has been marked by economic collapse, hyperinflation and shortages of many basic items, was sworn in for a second term as president earlier this month.

The legitimacy of his victory in May has been questioned amid widespread claims of vote-rigging in a ballot boycotted by opposition parties.

The chances of concerted action by the UN Security Council are limited by Russia’s opposition.

Russia’s UN ambassador, Vassily Nebenzia, opposed the UN meeting on Venezuela, saying it did not represent a threat to international peace and security. 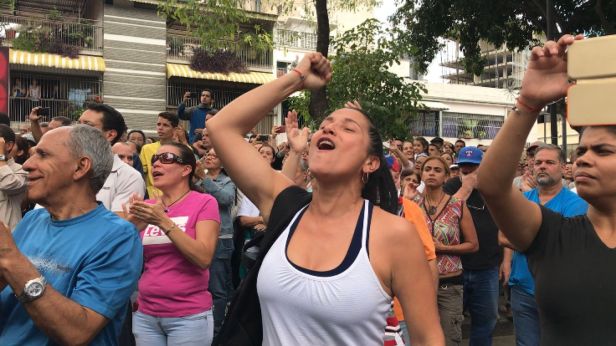 He accused Washington of attempting «a coup d’etat», a charge Mr Maduro also levels at his opponents.

At least 20 people have died in protest-related violence, the UN said, and a big opposition rally is planned in Caracas next week.