A teenage girl who did not play soccer magically became a star soccer recruit at Yale. Cost to her parents: $1.2 million.

A high school boy eager to enroll at the University of Southern California was falsely deemed to have a learning disability so he could take his standardized test with a complicit proctor who would make sure he got the right score. Cost to his parents: at least $50,000.

A student with no experience rowing won a spot on the U.S.C. crew team after a photograph of another person in a boat was submitted as evidence of her prowess. Her parents wired $200,000 into a special account.

In a major college admissions scandal that laid bare the elaborate lengths some wealthy parents will go to get their children into competitive American universities, federal prosecutors charged 50 people on Tuesday in a brazen scheme to buy spots in the freshman classes at Yale, Stanford and other big-name schools.

Thirty-three well-heeled parents were charged in the case, including Hollywood celebrities and prominent business leaders, and prosecutors said there could be additional indictments to come.

Also implicated were top college athletic coaches, who were accused of accepting millions of dollars to help admit undeserving students to a wide variety of colleges, from the University of Texas at Austin to Wake Forest and Georgetown, by suggesting they were top athletes.

The scheme unveiled Tuesday was stunning in its breadth and audacity. It was the Justice Department’s largest-ever college admissions prosecution, a sprawling investigation that involved 200 agents nationwide and resulted in charges against 50 people in six states.

The charges also underscored how college admissions have become so cutthroat and competitive that some have sought to break the rules. The authorities say the parents of some of the nation’s wealthiest and most privileged students sought to buy spots for their children at top universities, not only cheating the system, but potentially cheating other hard-working students out of a chance at a college education.

In many of the cases, prosecutors said, the students were not aware that their parents were doctoring their test scores and lying to get them into school. Federal prosecutors did not charge any students or universities with wrongdoing.

“The parents are the prime movers of this fraud,” Andrew E. Lelling, the United States attorney for the District of Massachusetts, said Tuesday during a news conference. Mr. Lelling said that those parents used their wealth to create a separate and unfair admissions process for their children.

“The real victims in this case are the hardworking students” who were displaced in the admissions process by “far less qualified students and their families who simply bought their way in,” Mr. Lelling said.

At the center of the sweeping financial crime and fraud case was William Singer, the founder of a college preparatory business called the Edge College & Career Network, also known as The Key.

The authorities said Mr. Singer used The Key and its nonprofit arm, Key Worldwide Foundation, which is based in Newport Beach, Calif., to help students cheat on their standardized tests, and to pay bribes to the coaches who could get them into college with fake athletic credentials.

Mr. Singer used The Key as a front, allowing parents to funnel money into an account without having to pay any federal taxes.

An excerpt from a criminal complaint showing an image that was manipulated for a college admission entry.

Parents paid Mr. Singer about $25 million from 2011 until February 2019 to bribe coaches and university administrators to designate their children as recruited athletes, which effectively ensured their admission, according to the indictment.

Mr. Singer appeared in federal court in Boston on Tuesday afternoon and pleaded guilty to counts of racketeering conspiracy, money laundering conspiracy, conspiracy to defraud the United States, and obstruction of justice.

Sitting very still and wearing a dark suit, he described how he arranged for students’ SAT and ACT results to be falsified by sending them to take the exams in Houston or Los Angeles, where he had bribed test administrators. He described the students as believing they were taking the tests legitimately, but said that his test proctor would correct their answers afterward. Mr. Singer said he would tell the proctor the score he wanted the student to get, and he would achieve that score exactly.

In his testimony, he referred to his bribery and money laundering schemes as “a side door” method of admission.

“If I can make the comparison, there is a front door of getting in where a student just does it on their own, and then there’s a back door where people go to institutional advancement and make large donations, but they’re not guaranteed in,” Mr. Singer said. “And then I created a side door that guaranteed families to get in. So that was what made it very attractive to so many families, is I created a guarantee.”

One of the prosecutors, Eric S. Rosen, said that Mr. Singer had in some cases falsified students’ ethnicities and other biographical details to take advantage of affirmative action.

Mr. Singer also described how, after he became a cooperating witness and was told by the prosecutors and the F.B.I. that he could not talk to anyone about the case, he tipped off several families that he was wired and warned them not to incriminate themselves in conversations with him. 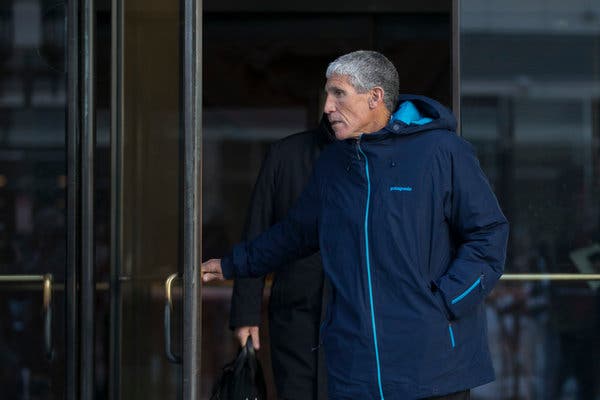 Most elite universities recruit student athletes and use different criteria to admit them, often with lower grades and standardized test scores than other students.

Mr. Singer helped parents go to great lengths to falsely present their children as the sort of top-flight athletes that coaches would want to recruit.

Mr. Singer fabricated athletic “profiles” of students to submit with their applications, which contained teams the students had not played on and honors they had not won. Some parents supplied “staged photographs of their children engaged in athletic activity,” according to the authorities; Mr. Singer’s associates also photoshopped the faces of the applicants onto images of athletes found on the internet.

“This is an extreme, unsubtle and illegal example of the increasingly common practice of using money to get an edge in the race for a place in an elite university,” said Christopher Hunt, who runs College Essay Mentor, a consulting service for applicants.

In one example detailed in an indictment, the parents of a student applying to Yale paid Mr. Singer $1.2 million to help her get admitted. The student, who did not play soccer, was described as the co-captain of a prominent club soccer team in Southern California in order to be recruited for the Yale women’s soccer team. The head coach of the Yale team, Rudolph Meredith, was bribed at least $400,000 to recruit the student.

After the profile was created, Mr. Singer sent the fake profile to Mr. Meredith, who then designated her as a recruit, even though he knew the student did not play competitive soccer, according to the complaint.

In its investigation, known internally as Operation Varsity Blues, the government focused on the 33 indicted parents. Those parents were willing to pay between $15,000 and $75,000 per test, which went to college entrance exam administrators who helped their children cheat on them by giving them answers, correcting their work or even letting third parties falsely pose as their children and take the tests in their stead, according to the indictment.

Mr. Singer instructed at least one parent, Mr. McGlashan, to claim that his son had learning disabilities in order to gain extended time for him to take his college entrance exam alone, over two days instead of one, according to court documents.

Dozens of people were charged in what the authorities said was a scheme to get students admitted to top schools, including the University of Southern California.CreditRozette Rago for The New York Times.

The government said that Mr. McGlashan’s son was told to take the exam at one of two test centers where Mr. Singer worked with test administrators who had been bribed to allow students to cheat. And Mr. Singer told Mr. McGlashan to fabricate a reason, such as a wedding, for why their children would need to take the test in one of those locations.

Mr. McGlashan’s son was unaware of the scheme, according to court documents.

Mr. McGlashan did not respond to an email seeking comment. TPG said that it had placed Mr. McGlashan on indefinite administrative leave effective immediately as a result of the charges.

When Mr. Singer explained the scheme last June to Gordon R. Caplan, co-chairman of the global law firm Willkie Farr & Gallagher, Mr. Caplan laughed and said, “And it works?” according to a transcript of a recorded phone conversation between the two men captured in a court-authorized wiretap.

Mr. Singer told Mr. Caplan that his daughter would not know that her standardized test scores had been faked.

“Nobody knows what happens,” Mr. Singer said, according to the transcript of the call. “She feels great about herself. She got a test score, and now you’re actually capable for help getting into a school. Because the test score’s no longer an issue. Does that make sense?”

A spokeswoman for Mr. Caplan and Willkie Farr did not respond to an email seeking comment.

Universities were quick to respond to the charges on Tuesday. According to the indictment, Stanford University’s head sailing coach, John Vandemoer, took financial contributions to the sailing program from an intermediary in exchange for agreeing to recommend two prospective students for admission.

Stanford said Tuesday that Mr. Vandemoer had been fired. The University of Texas at Austin released a statement Tuesday saying that its men’s tennis coach, Michael Center, has been placed on leave. And at U.S.C., Donna Heinel, a top athletic director, and Jovan Vavic, the men’s and women’s water polo coach, were terminated. Ms. Heinel received more than $1.3 million in bribes and Mr. Vavic about $250,000 according to federal prosecutors.

In a letter to the college community, Wanda M. Austin, the interim president of the University of Southern California, said, “It is immensely disappointing that individuals would abuse their position at the university this way.”

Like other college administrators, Dr. Austin said she did not believe that admissions officers were aware of the scheme or took part in it, and she described the university as a victim.