The United States military evacuated its small contingent of troops from the Libyan capital on Sunday as rival militias raced to stop the forces of an aspiring strongman, Gen. Khalifa Hifter, from taking control of the city.

Forces under the command of General Hifter made a surprise advance on the outskirts of the capital, Tripoli, on Thursday, setting up a battle with a coalition of armed factions from the region around the city — the grand prize in a chaotic eight-year fight for control after the ouster of the dictator Muammar el-Qaddafi during the Arab Spring revolts.

Tripoli is the northern African country’s financial hub, receiving the income from the sales of Libyan oil, housing the central bank, and paying the salaries of soldiers and public employees across the country.

By Sunday morning, both sides had begun attacking from the air, using the small and primitive air forces at their command, but the exact targets and extent of the damage could not be immediately determined.

General Hifter, 75, already has at least loose control over most of eastern Libya, as well as important parts of the southern desert. His forces’ advance on Tripoli this past week has now put him in striking distance of fulfilling a five-year-old vow to reunite Libya under his rule.

Some analysts, however, say that he has extended his supply lines so far that without a quick victory, he could be forced into a humiliating retreat.

General Hifter’s forces appeared to have maintained control of the defunct international airport since Friday evening, putting them within 17 miles of the Mediterranean coast and Tripoli’s central square.

Residents of Tripoli said that the two sides had spent the days mobilizing and deploying their forces, with a more pitched battle expected on Sunday. By afternoon, residents reported that the coalition of Tripoli-area militias was fighting to drive General Hifter’s forces out of the town of Aziziya, about 20 miles southwest of Tripoli.

Representatives of the United Nations mission in Libya said on Sunday that it remained active in Libya and had not evacuated. But the United State military personnel had left by boat on Sunday morning, according to a resident who provided photographs of the ship as it departed.

The United States military’s Africa Command said in a statement that its mission in Libya had included providing support to diplomatic efforts, as well as “counterterrorism activities.” 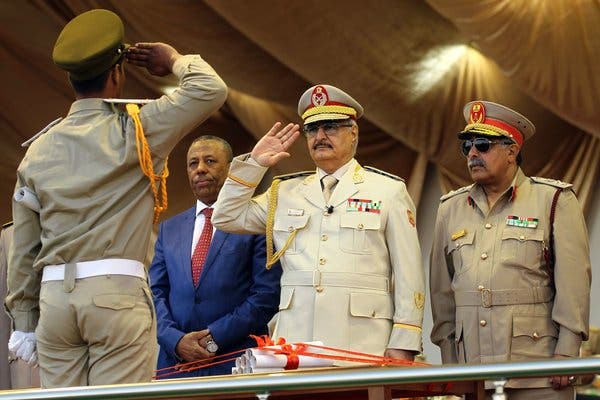 “The security realities on the ground in Libya are growing increasingly complex and unpredictable,” Gen. Thomas D. Waldhauser of the Marine Corps, the head of United States Africa Command, said in the statement. “Even with an adjustment of the force, we will continue to remain agile in support of existing U.S. strategy.”

Libya collapsed into a patchwork of city-states after the ouster of Colonel Qaddafi. Each city established its own militia and multiple militias competed for control of the two largest cities, Tripoli in the west and Benghazi in the east. In Tripoli, some of the dominant militias have also profited from extortion, migrant trafficking and other illegal activities, according to residents and United Nations observers.

General Hifter, a former officer in Colonel Qaddafi’s army, once sought to lead a coup against him and then lived in Virginia as a C.I.A. client. He returned during the uprising against Colonel Qaddafi in 2011, and from a base in eastern Libya, he has received extensive backing from Egypt and the United Arab Emirates, both of which have sought to restore some version of the old authoritarian order as a way to stabilize the country.

In more recent years, France has provided military assistance in the hope that General Hifter could help stop the free flow of migrants and extremists through the Sahara to the south, and Russia has helped him print currency in order to restore liquidity to the economy in areas under his control.

The United States has publicly backed the attempts of the United Nations to set up an alternative government in Tripoli that may unify the warring factions. But without any significant military force of its own in the country, the United Nations-backed government has remained dependent on local militias for security. And General Hifter has not shown any willingness to submit to civilian authority

The advance of his forces toward Tripoli has brought together a new coalition to stop him, including several militias based in the city, as well as powerful brigades from the cities of Misrata, on the coast, and Zintan, in the mountains to the west.

Analysts say that the next phase of the battle may turn on the question of whether that coalition holds together or any of its components break ranks to strike an accommodation with General Hifter.

The United States military has sought to remain neutral between the United Nations’ so-called Government of National Accord, or G.N.A., on one hand, and General Hifter’s forces, which he calls the Libyan National Army, or L.N.A., on the other.

“We don’t want to get in front of the diplomatic effort, and we want to maintain our neutrality,” General Waldhauser explained in remarks to the news media at a security conference in Munich in February, “because it’s very, very important that we don’t, all of a sudden, back one side that turns the other way.”

The Libyan militias “change allegiances quite regularly,” General Waldhauser continued. “And so our U.S. position has always been and continues to be to support the G.N.A. But at the same time, you know, Hifter and the L.N.A. are a factor there, and whatever solution comes to pass is going to involve the L.N.A. and Hifter.”

To prepare for all possibilities, General Waldhauser said, “we support the G.N.A. but we have lines of communications open with others,” including General Hifter.