The Swedish 16-year-old carried a sign reading «Join the Climate Strike,» which she showed the Pope after he greeted her.

A day earlier, Thunberg urged European Union leaders to «panic» about climate change, as she addressed a committee of the European Parliament in Strasbourg, France.

She went on to condemn politicians for spending their time «arguing about taxes or Brexit» in the face of a building climate crisis.
Thunberg, whose sit-ins outside the Swedish parliament inspired students worldwide to hold school strikes demanding climate action, spoke to a «packed» room of EU politicians, according to the AFP news agency.
«Our house is falling apart, and our leaders need to start acting accordingly,» Thunberg said. «If our house was falling apart, our leaders wouldn’t go on like you do today. You would change almost every part of your behavior, as you do in an emergency.»
«If our house was falling apart, you wouldn’t hold three emergency Brexit summits, and no emergency summit regarding the breakdown of the climate and environment,» she added, to applause from the committee. 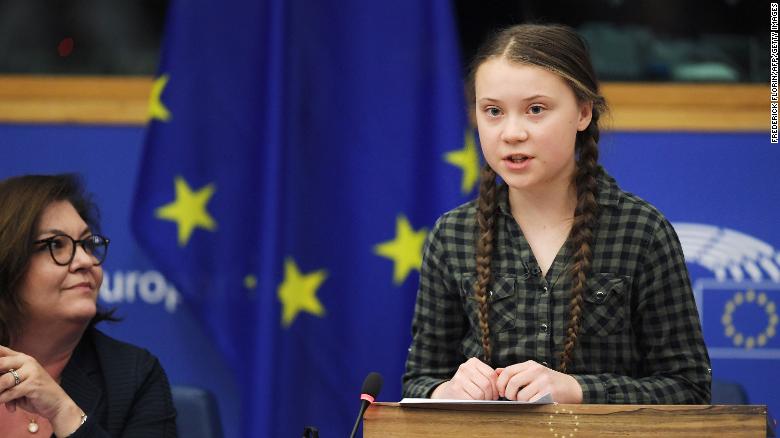 During Tuesday’s meeting, Thunberg began to cry as she talked about what scientists have termed the sixth mass extinction. «Erosion of fertile topsoil, deforestation of our great forest, toxic air pollution, loss of insects and wildlife, the acidification of our oceans,» she said, her voice wavering. «These are all disastrous trends being accelerated by a way of life that we, in our financially fortunate part of the world, see as our right to simply carry on.»
After telling politicians to «make the best available science the heart of politics and democracy,» Thunberg addressed the impending European Parliament elections on May 23, asking her audience to vote on behalf of striking schoolchildren. «You need to listen to us, we who cannot vote. You need to vote for us, for your children and grandchildren,» she said. «In this election, you vote for the future living conditions of humankind.»
Speaking in Brussels in February, Thunberg said the European Union must double its targets for cutting greenhouse gases to 80% from 40% by 2030, according to AFP.
In January, she gave a speech at the World Economic Forum in Davos, Switzerland, telling political and business leaders that they were to blame for the climate crisis.
Thunberg also spoke at the United Nations climate summit in Katowice, Poland in December. «You are not mature enough to tell it like is,» she told climate negotiators. «Even that burden you leave to us children.»
To read the original post, click here.