Tokyo (CNN) – Japan’s new emperor, Naruhito, has formally ascended to the Chrysanthemum Throne, replacing his father, Akihito, who had abdicated a day earlier.

The sun came out for a morning ceremony at the Imperial Palace in Tokyo on Wednesday, as Naruhito became the 126th Emperor of Japan, the latest in an unbroken line that stretches back 14 centuries.
During the special ritual in the palace’s Matsu-no-Ma state room, an almost exclusively male audience saw Naruhito, 59, take possession of royal regalia and seals, including a sacred sword, that provide ceremonial proof of his ascension. 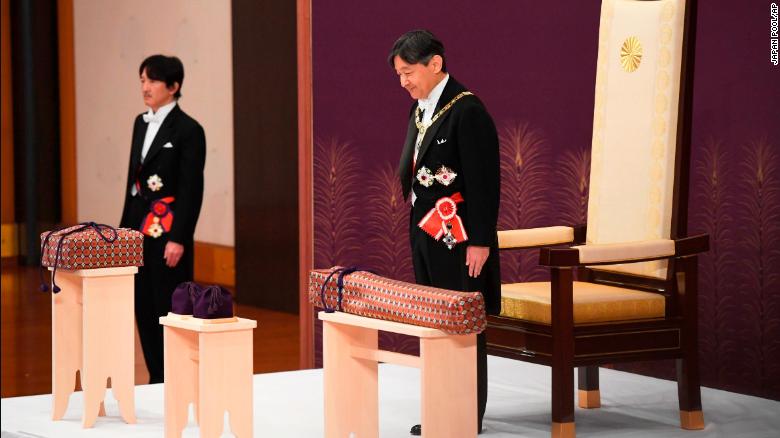 Japan’s new Emperor Naruhito receives the Imperial regalia of sword and jewel as proof of succession at the ceremony at Imperial Palace in Tokyo, Wednesday, May 1, 2019. Standing at left is Crown Prince Akishino.
Only adult male imperial family members were allowed to attend the centuries-old ceremony, but Japan’s lone female cabinet member, Satsuki Katayama, was in attendance.
Tuesday’s abdication was the first in more than 200 years, since Emperor Kokaku stepped down in 1817. 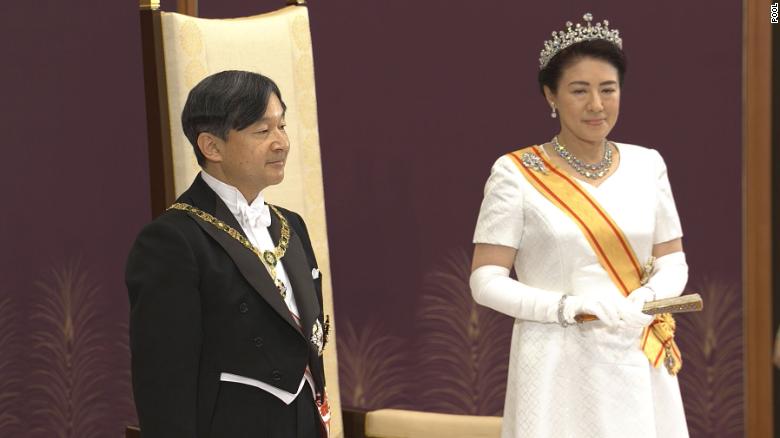 Emperor Naruhito stands with his wife, Empress Masako at a ceremony in the State Hall of Tokyo’s Imperial Palace.
«I sincerely pray for the happiness of the people and the further development of the nation as well as the peace of the world.»
Japan’s Prime Minister Shinzo Abe congratulated Naruhito and also pointed to Akihito’s role in transforming the role.
«Emperor, we are looking up to you as a symbol of Japan and the Japanese people, and we are filled with hope for peace and prosperity, a bright future of Japan. Everybody is uniting together in heart and building up our new culture in the future.»

Naruhito’s ascension signals the start of the «Reiwa» era — each emperor’s reign is marked by their era name. Naruhito’s era name was adapted from an 8th century anthology of classic poetry.
While the official government translation of «Reiwa» is «beautiful harmony,» it can also be interpreted as «commanded peace,» a more authoritarian reading.
«It is his reign name to shape through his actions and gestures,» says Jeffrey Kingston, director of Asian Studies at Temple University in Japan.
He says that Naruhito’s challenge in defining his era will be to avoid getting «co-opted by Japan’s right-leaning politicians.»

The role of Japan’s emperor has changed significantly since Naruhito’s grandfather, Emperor Hirohito, sat on the throne. Once considered the living embodiment of gods, the emperor has become a largely symbolic figure.
Unlike other monarchs, Naruhito is a symbol of the state rather than the head of state, and the Japanese emperor wields no political power.
Much like his father, who was seen as a reformist, Naruhito sees the role as an institution rather than an embodiment of divinity, says Andrew Gordon, a leading scholar of modern Japanese history at Harvard University.
Naruhito has indicated that he will continue the outreach and unifying role that his father played.
«There’s nothing in the Constitution that says you have to go around cutting ribbons … that’s a role (Akihito) defined for himself,» Gordon said.
«I think his son will continue in the mode of his father; he’s said publicly that he was watching and learning from his father,» he said. «I think the basic style of the monarchy and the (role of the) monarch that he’s put in place, I expect will continue.»