Jakarta, Indonesia (CNN)Six people were killed and more than 200 injured in Indonesia’s capital amid angry protests against the results of the country’s recent general election.

On Tuesday, the General Elections Commission confirmed that incumbent President Joko Widodo — known as Jokowi — had won 55.5% of the vote, securing a second term as leader of the world’s third largest democracy.
His longtime rival, Prabowo Subianto, has claimed widespread ballot-rigging, and his camp said he plans to challenge the election results by filing a lawsuit with the Constitutional Court. 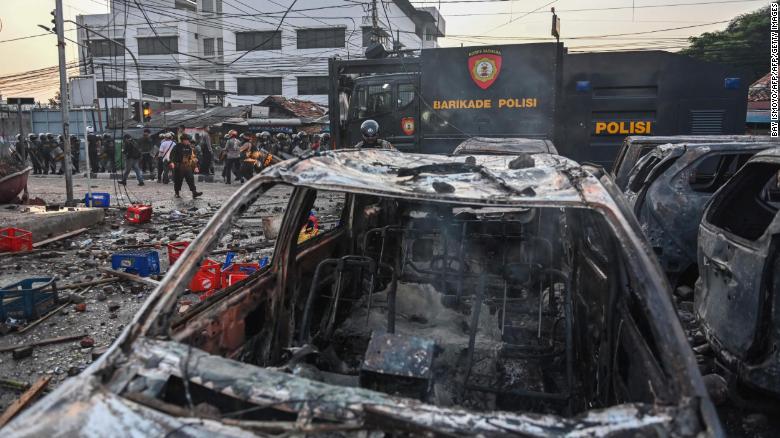 Cars after an overnight demonstration by the Elections Oversight Body in Jakarta on May 22, 2019.
Hundreds took to the streets of Jakarta on Tuesday night, throwing stones and firecrackers at police as smoke billowed from cars that had been set alight. Police in riot gear fired teargas and water at protestors.
Six people died and another 200 were injured in the protests that erupted overnight, according to Jakarta’s Governor Anies Baswedan.
On Wednesday, Jakarta woke to streets littered with rubble and the burnt-out shells of cars. Dozens of shops in central Jakarta were closed on Wednesday morning as hundreds of protestors again took to the streets, monitored by by riot police carrying shields and wearing protective gear.
Authorities had been preparing for risk of civil unrest — there was already heavy security and barbed-wire barricades up in Jakarta on Tuesday. 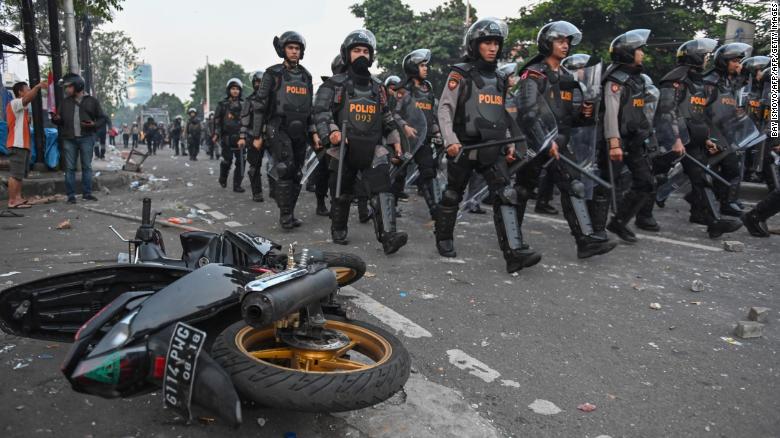 This year’s election was the second time Jokowi and Prabowo have faced off.
The pair went head-to-head in the 2014 general election, when there was a feeling that democracy itself was at stake. At the time, Prabowo indicated that he would roll back democratic reform, while Jokowi, a self-styled man-of-the-people with no links to the military or the country’s traditional elite, promised to protect hard-won gains.
After losing that vote, Prabowo slammed the election commission, citing «massive, structural and systematic cheating,» but the Constitutional Court upheld Widodo’s victory.
Indonesia’s 2019 election was billed as one of the most complicated single-day ballots ever undertaken. For the first time, the country held its presidential and legislative elections on the same day, with more than 245,000 candidates running for over 20,000 seats.
Some 193 million people were eligible to vote across the archipelago’s 17,000 islands, and more than 800,000 polling stations and six million election workers were involved.