It was a European election night that lived up to the hype. The constitution of the new European Parliament (below) may not have transformed radically but the steady dissolution of the EU’s dominant blocs will set the tone for Brussels policymaking and its new batch of politicians for the next five years.

The FT reports on a disparate pro-European centre that gained new members and largely held firm in the face of its biggest threat from anti-establishment parties. Relive the best of the action with our live blog from the night.

To help you digest it all, here are the Brussels Briefing’s takeaways from the polls.

The far-right earthquake didn’t quite shake the parliament’s foundations.

Provisional estimates show the three existing Eurosceptic groups — which include Poland’s government (the ECR), Italy’s League (the ENF), and Marine Le Pen’s National Rally (EFDD) — will make up around 25 per cent of the chamber, growing from around a fifth but not to the third that had been predicted by some.

Stalwarts of the anti-EU right such as Geert Wilders disappear altogether, while the far-right Danish People’s party suffered a shock collapse in its vote share. There’s still plenty of horse-trading to be done among the populists about who joins which groups. But for now, they will have 172 combined seats. 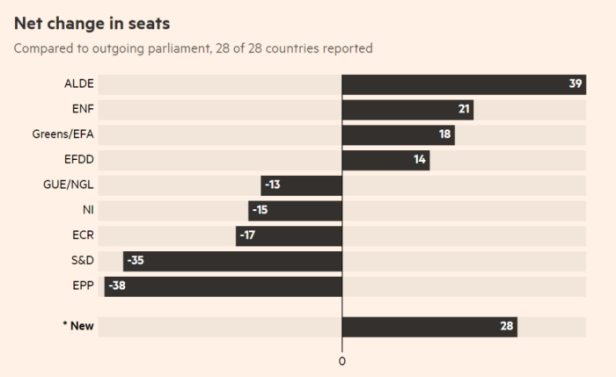 Rather than the far-right, it was the Greens who were celebrating after big gains in Germany and a decent showing in France. They won around 20 new seats. “Indispensable” was how Philippe Lamberts, co-leader of the Greens, called his party’s role in a future pro-EU majority in the parliament. The Green surge suggests that climate change will be a new battleground in European politics.

Flirt with the far-right, get burnt

With the notable exception of Sebastian Kurz’s Austrian People’s party, many centre-right groups that aped the nativist rhetoric of the extreme right suffered last night. France’s Republicans slumped to just an 8 per cent vote share, Spain’s Popular party was trounced by the socialists, and Italy’s Forza was no competition for Matteo Salvini. If Austria and Kurz were no longer the model — as Hungary’s Viktor Orban also seems to have acknowledged — then the EPP has some serious thinking to do about where it goes next.

Turning the tide on turnout 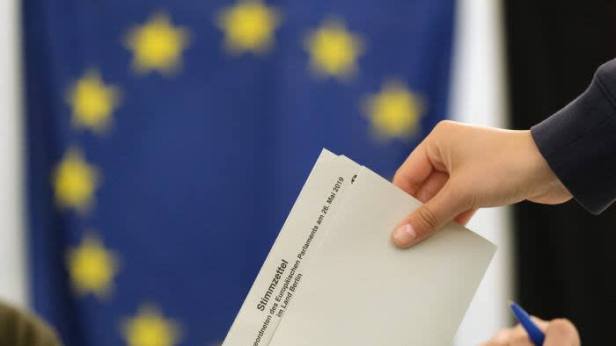 The 40-year curse has been broken: electoral turnout has risen for the first time since the inaugural European Parliament elections in 1979. Turnout hit 50.5 per cent, up from 42.6 per cent in 2014 — recording healthy gains in Spain, Romania, Hungary, Poland, France and Germany.

Falling participation has become a monkey the parliament was desperate to get off its back, as it made a mockery of the assembly’s claims to represent the real voice of public opinion in EU decision-making.

And contrary to fears before the vote, it wasn’t necessarily Eurosceptic voters who were most motivated to turn up, with pro-Europeans also “counter mobilising” in numbers.

Macron is still a winner

Emmanuel Macron narrowly trailed Marine Le Pen, but France’s president has plenty to smile about. Aside from Ms Le Pen (who won comprehensively in the last EU parliament polls in 2014) Mr Macron’s rivals were nowhere to be seen.

The traditional left- and rightwing parties that between them governed France for more than 50 years won less than 10 per cent each. The political realignment that Mr Macron engineered with his election to the presidency two years ago shows no sign of reversing.

As for Brussels, Mr Macron now possesses something he has sorely lacked up to now: an influential group in the European Parliament to give him extra heft in his efforts to revamp the union.

Who is the biggest of them all?

Brussels is the gift that keeps on giving to Nigel Farage. His new Brexit party will win 29 seats according to initial estimates — level with Angela Merkel’s CDU/CSU — and giving Mr Farage the honour of leading the joint single largest national party in the European Parliament.

The maths of picking the president

The people have spoken, and who the next European Commission president will be is anyone’s guess. Manfred Weber of the EPP wants the main pro-EU parties to rally behind him, or at least behind the idea that the Commission job must go to a Spitzenkandidat. But everyone else is playing hard to get.

The provisional numbers are tight. Any commission president will need 376 votes to secure the absolute majority needed in parliament. The pro-EU parties hold around two-thirds of seats. But the majority isn’t as comfortable as it seems once abstentions, no-shows, Brits and Hungarians are taken into account (parliament insiders say a working majority of 60 per cent is needed in practice).

Here’s some of the options:

The options are limited, especially if the new commission president wants to build a majority without UK votes.

The Rainbow coalition falls short. The big three can just about make it once Brits and Orban’s MEPs from Hungary are excluded, but only just. Without the Liberals, it is impossible. The jumbo coalition is the safest option but the most complicated to negotiate. In other words, the haggling has only just begun.

All politics is local and the ramifications on national politics from the EU vote will be seen across the continent.

Alexis Tsipras of Greece called a snap election after a drubbing at the ballot box over the weekend. Ireland’s Leo Varadkar also hinted that an early general election may be a possibility before the year is out.

Dire results for Germany’s centre-left SPD might shorten the lifespan of Angela Merkel’s grand coalition in Berlin, although plenty of people have lost money making that bet.

Charles Michel of Belgium was the only serving prime minister who went through national elections over the weekend; his days look numbered. In Italy, the Five Star Movement fell further behind its rightwing junior coalition partner and could embolden Salvini to head for a national poll later this year.

On the other side of the ledger were a few leaders breathing a sigh of relief. Sebastian Kurz was justifiably “speechless” after his thumping victory in Austria, which came despite the scandal around the far-right Freedom party, his coalition partner, that brought down the government. The strong showing may make his opponents think twice about ousting him in a no-confidence vote on Monday.

Lars Lokke Rasmussen pulled off an against-the-odds victory in Denmark, beating the centre-left into second place just weeks before the country’s general election.

Silvio Berlusconi is back. Italy’s veteran leader, media mogul, and survivor of statuette attacks, has been elected as an MEP for his Forza Italia party. But Yanis Varoufakis, the former Greek finance minister may not be joining him (final results pending).

In the UK, Daniel Hannan, whose evangelising on Brexit helped turn his Conservative party against the EU, scraped back into the parliament, surviving the Tories’ electoral meltdown. His counterpart Syed Kamall, the Tory who led the European Conservatives and Reformists group, lost his seat.