Over the last decades, we have witnessed the rapid -one could say- aggressive development of the People’s Republic of China (hereinafter PRC) both at a national and an international level. According to the IMF World Economic Outlook Database (October 2020), the PRC will be the sole developed economy to grow in 2020, with projected real GDP growth of about 1.9% for the year. This is in stark contrast to the U.S. economy, which is expected to shrink by 4.3% in 2020 (IFM Report, October 2020). China’s ability to swiftly restart its economic engines, in spite of the global pandemic, seems to be the catalyst that can make the country overtake the US juggernaut as the world’s biggest economy in the foreseeable future. Naturally, this substantial shift is already having an influence in the existing balance of power and the erstwhile sole superpower, the United States will defend its dominant position in the global chess board. The issue that the analysis at hand will be tackling, however, is of a different nature: could this emerging conflict have been predicted by the father of International Relations more than 2.500 years ago?

Thucydides and the Peloponnesian War

Thucydides was an Ancient Greek general and historian. His work “Historiae” (Ἱστορίαι) is an account of the Peloponnesian War between Athens and Sparta and is revered for its impartiality and empirical methodology; in the eyes of Thucydides, war was not brought upon the two superpowers by the wrath of the Gods. Instead, it was the inevitable consequence of Athens’ aggressive growth and expansion and other geostrategic undercurrents. As one of the first political realists, he viewed the behavior of actors and subsequent outcomes of relations between states as ultimately mediated by the emotions of fear and self-interest (Strauss, 1978). In less than fifty years after the end of the Persian Wars, Athens grew from a second-tier power to the premier maritime force in the Greek world and used the military alliance that it controlled (The Delian League) to challenge Spartan hegemony. To quote Thucydides himself: “What made war inevitable was the growth of Athenian power and the fear which this caused in Sparta”. (τὴν μὲν γὰρ ἀληθεστάτην πρόφασιν, ἀφανεστάτην δὲ λόγῳ, τοὺς Ἀθηναίους ἡγοῦμαι μεγάλους γιγνομένους καὶ φόβον παρέχοντας τοῖς Λακεδαιμονίοις ἀναγκάσαι ἐς τὸ πολεμεῖν) (Thucydides 1.23.6)

This inescapable road to war is the quintessence of the term, that became known as ‘Thucydides’ Trap’, a perpetual phenomenon coined by the famous political scientist Graham Allison (Allison, 2017). The trap outlines a stagnant power-rising power relationship, where a nation experiencing rapid economic and political growth will come to challenge a pre-existing status-quo-power with the apple of discord being the dominance in the international or a peripheral system. Whereas this phenomenon was first noticed during the 5th century B.C., we can easily extract a common formula that transcends historical periods. If instead of Athens and Sparta we say that “What made war inevitable was the growth of power X and the fear which this caused in power Y”, we can observe multiple dynamic rivalries throughout history, which fell into Thucydides’ Trap. The Belfer Center of Harvard Kennedy School presents 16 cases in which a major ruling power has been challenged by a major rising power over the last five centuries (Harvard Thucydides Trap Project 2017). 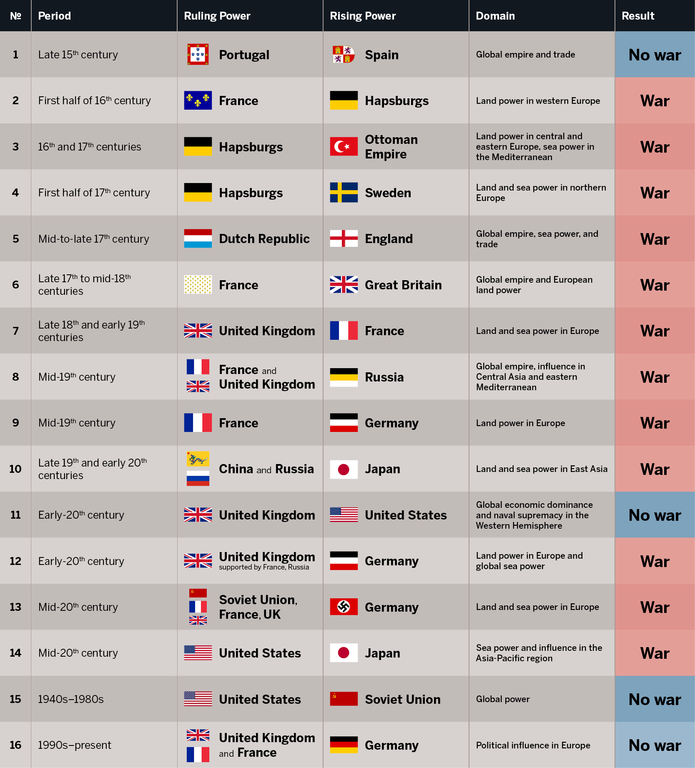 12 out of the 16 cases resulted in conflict and specifically some of the bloodiest military confrontations in modern history. Thucydides’ Trap manages to explain the outbreak of the Thirty Years War, the Napoleonic Wars, the Crimean War, as well as both World Wars. It is of paramount importance to also examine the case that could most accurately be paralleled with the Peloponnesian War: The Cold War. With the exception of some anachronisms, the story was the same: A rising naval superpower with strong satellite states and a liberal ideology against a stagnant authoritarian state with the most powerful continental army in the world. In spite of the obvious similarities, unlike Athens and Sparta, the confrontation between the United States and the USSR never escalated to an all-out war. The answer to “why the equation was the same but the outcome different” will be helpful to understand why this modern rivalry between the United States and China may not be the sword of Damocles for international peace of security.

Since the end of World War II, there has been no direct confrontation between the world’s superpowers. This can be attributed to the use of force being frowned upon as a means of settling disputes between states and, most importantly, to nuclear deterrence. Even if the United States’ and the USSR’s rivalry fell right into Thucydides’ Trap, direct conflict between the world’s biggest nuclear powers would lead to a nuclear Armageddon. It was the fear of Mutually Assured Destruction (M.A.D.) that dissuaded both sides from all-out war. The PRC might possess a smaller nuclear stockpile than the Soviet Union, but it is highly unlikely that any sane leader would launch a nuclear attack against another nuclear power. With direct conflict seeming an unrealistic -worst-case scenario for all parties- this does not mean that China will not resort to any other means available to seek dominance in the international system.

China: From the century of humiliation to the “Chinese” Century

The recent history of China can easily be labeled a “success story”. From the so called century of humiliation (1840s-1940s), when the country had suffered huge internal fragmentation and embarrassing loss of territory, to the unification under Mao and the major Deng Xiaoping reforms that opened up the PRC to the world, China has come a long way over the last two centuries. In less than 100 years, a vast state torn apart by foreign intervention, warlords and civil war has evolved into an economic powerhouse that seeks to live up to the legacy of the Mandate of Heaven, the ancient religious-political doctrine that saw China as the center of human civilization (Marshall, 2002). After achieving political stability and a robust economy, the country turns its attention to the world stage: The “One Belt-One Road Initiative”, a massive infrastructure investment and development project adopted by the Chinese Government, that spans across 5 continents and involves 138 states, is indicative of the extroversion of the People’s Republic (Hosain and Hossain, 2019). The uglier side of this outwardness is the country’s expansionist tendency in the South China Sea (Lo, 1989) and the debt trap diplomacy in developing countries (Maluki & Lemmy, 2009) This aggressive search of a dominant position in global politics is also shown in the field of International and Regional Organizations:

Keeping the aforementioned in mind, many analysts claim that humanity is already going through the Chinese century (Economist, 2018) The Chinese Dragon is at the forefront of global change and actively seeks hegemony in this reality. But will the American Eagle stand idle and accept the transition in this new world order? Could this emerging rivalry lead to a military conflict even at a small scale? Could Taiwan be the modern Corfu that coerces the two sides into a direct confrontation?  Whether it turns violent or not, this new “conflict” is destined to define the politics for the decades to come. Thucydides’ Trap is a scientific proof that history does indeed repeat itself and, for the sake of international peace and stability, world leaders should pay heed to the lessons the writings of Thucydides teach us eons after his death. George Santayana said it better with his infamous aphorism, warning us that “those who cannot remember the past are condemned to repeat it”…